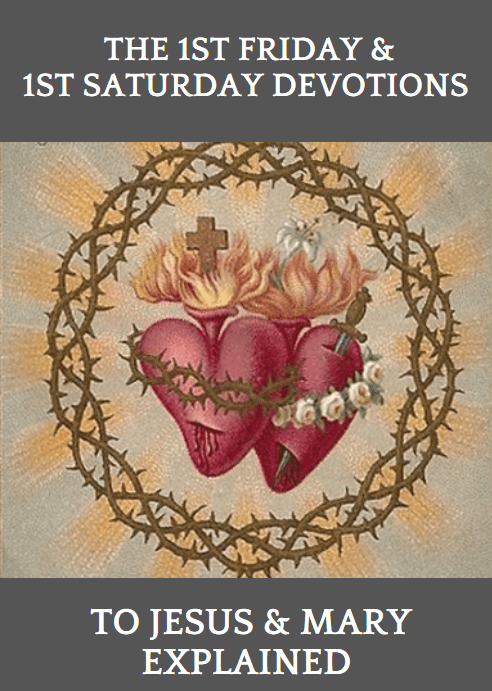 The devotions are similar in that they call on the faithful to “stand in the gap” by doing penance for sinners, and both give a special promise of Divine assistance at the hour of death, that is, the promise of dying in a state of grace and therefore obtaining heaven.

Our Lord appeared to St. Margaret Mary Alocoque (1647-1690), a French nun in the Visitation Order, and gave her the special task to spread devotion to His Most Sacred Heart at a time when religion was growing cold in the hearts of mankind.

For those who did this faithfully, he made what St. Margaret Mary referred to as the “Great Promise”.

“I promise you in the unfath­omable mercy of my heart that my omnipotent love will procure the grace of final penitence for all those who receive communion on nine successive first Fridays of the month; they will not die in my disfavor [the grace of final repentance], or without having received the sacraments, since my divine heart will be their sure refuge in the last moments of their life.”

The practice of the First Saturday devotion was requested by Our Lady of Fatima, who appeared to three shepherd children in Fatima, Portugal, multiple times starting in 1917.

She said to Lucia, the oldest of the three children:

“I shall come to ask . . . that on the First Saturday of every month, Communions of reparation be made in atonement for the sins of the world.”

Years later she repeated her request to Sr. Lucia, the only one still living of the three young Fatima seers, while she was a postulant sister living in a convent in Spain:

“Look, my daughter, at my Heart, surrounded with thorns with which ungrateful men pierce me at very moment by their blasphemies and ingratitude. You at least try to console me, and say that I promise to assist at the hour of death, with the graces necessary for salvation, all those who, on the first Saturday of five consecutive months, shall confess, receive Holy Communion, recite five decades of the rosary, and keep me company for 15 minutes while meditating on the 15 mysteries of the rosary, with the intention of making reparation to me.”

While keeping up with these devotions over five or nine consecutive months is not easy, the reward for making the effort is eternal. Look again at those promises from Jesus and Mary