Anointing of the Sick

The Church believes and confesses that among the seven sacraments there is one especially intended to strengthen those who are being tried by illness, the Anointing of the Sick

Catechism of the Catholic Church 1511

The anointing of the sick is administered to bring spiritual and even physical strength during an illness, especially near the time of death. It is most likely one of the last sacraments one will receive. A sacrament is an outward sign established by Jesus Christ to confer inward grace. In more basic terms, it is a rite that is performed to convey God’s grace to the recipient, through the power of the Holy Spirit.

“Is any among you sick? Let him call for the presbyters of the Church, and let them pray over him, anointing him with oil in the name of the Lord; and the prayer of faith will save the sick man, and the Lord will raise him up; and if he has committed sins, he will be forgiven” (Jas 5:14-15)

Human Sickness and Its Meaning in the Mystery of Salvation

Suffering and illness have always been among the greatest problems that trouble the human spirit. Christians feel and experience pain as do all other people; yet their faith helps them to grasp more deeply the mystery of suffering and bear their pain with greater courage. From Christ’s words, they know that sickness has meaning and value for their own salvation and for the salvation of the world. They also know that Christ, who during his life often visited and healed the sick, loves them in their illness.

Although closely linked with the human condition, sickness cannot as a general rule be regarded as a punishment inflicted on each individual for personal sins (see John 9:3). Christ himself, who is without sin, in fulfilling the words of Isaiah took on all the wounds of his passion and shared in all human pain (see Isaiah 53:4-5).  Christ is still pained and tormented in his members, made like him. Still, our afflictions seem but momentary and slight when compared to the greatness of the eternal glory for which they prepare us (see 2 Cor. 4:17).

Part of the plan laid out by God’s providence is that we should fight strenuously against all sickness and carefully seek the blessings of good health, so that we may fulfill our role in human society and in the Church. Yet we should always be prepared to fill up what is lacking in Christ’s suffering for the salvation of the world as we look forward to creation’s being set free in the glory of the children of God (see Col. 1:24; Rom 8:19-21)

Moreover, the role of the sick in the Church is to be a reminder to others of the essential or higher things. By their witness, the sick show that our mortal life must be redeemed through the mystery of Christ’s death and resurrection.

The sick person is not the only one who should fight against illness. Doctors and all who are devoted in any way to caring for the sick should consider it a duty to us all the means which in their judgment may help the sick, both physically and spiritually. In so doing, they are fulfilling the command of Christ to visit the sick, for Christ implied that those who visit the sick should be concerned for the whole person and offer both physical relief and spiritual comfort.

The Sacrament for the Sick

The Lord himself showed great concern for the bodily and spiritual welfare of the sick and commanded his followers to do likewise. This is clear from the gospels, and above all from the existence of the sacrament of anointing, which he instituted and which is made known in the Letter of James. Since then the Church has never ceased to celebrate this sacrament for its members by the anointing and prayer of its priests, commending those who are ill to the suffering and glorified Lord, that he may raise them up and save them (see James 5:14-16). Moreover, the Church exhorts them to associate themselves willingly with the passion and death of Christ (see Romans 8:17), and thus contribute to the welfare of the people of God.

Those who are seriously ill need the special help of Gods grace in this time of anxiety, lest they be broken in spirit and, under the pressure of temptation, perhaps weakened in their faith.

This is why, through the sacrament of anointing, Christ strengthens the faithful who are afflicted by illness, providing them with the strongest means of support.

The celebration of this sacrament consists especially in the laying on of hand by the priest of the Church, the offering of the prayer of faith, and the anointing of the sick with oil made holy by God’s blessing. This rite signifies the grace of the sacrament and confers it.

This sacrament gives the grace of the Holy Spirit to those who are sick: by the grace the whole person is helped and saved, sustained by trust in God, and strengthened against the temptations of the Evil One and against anxiety over death.

In the anointing of the sick, which includes the prayer of the faith, faith itself is manifested. Above all, this faith must be made actual both in the minister of the sacrament and, even more importantly, in the recipient. The sick person will be saved by personal faith and the faith of the Church, which looks back to the death and resurrection of Christ, the source of the sacrament’s power (see James 5:15), and looks ahead to the future kingdom that is pledged in the sacraments.

Who can receive the Sacrament?

The Letter of James states that the sick are to be anointed in order to raise them up and save them. Great care and concern should be taken to see that those of the faithful whose health is seriously impaired by sickness or old age receive this sacrament.

The sacrament may be repeated if the sick person recovers after being anointed and then again falls ill or if during the same illness the person’s condition becomes more serious.

In public and private catechesis, the faithful should be educated to ask for the sacrament of anointing and, as soon as the right time comes, to receive it with full faith and devotion. They should not follow the wrongful practice of delaying the reception of the sacrament. All who care for the sick should be taught the meaning and purpose of the sacrament.

The sacrament of anointing may be conferred upon sick people who, although they have lost consciousness or the use of reason, would as, Christian believers, probably have asked for it were they in control of their faculties.

When a priest has been called to attend those who are already dead, he should not administer the sacrament of anointing. Instead, he should pray for them, asking that God forgive their sins and graciously receive them in the kingdom.

The above comes from the Roman Ritual of Pastoral Care of the Sick: Rites of Anointing and Viaticum. 1982. 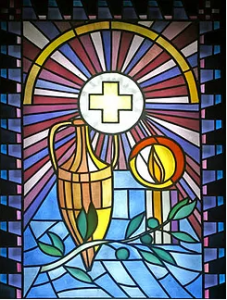