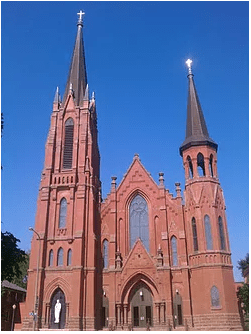 Our Pastors at the Church of St. Augustine

St. Augustine’s congregation, like most of the parishes in the Diocese, had its origin in very humble beginnings.  In 1857 there were a few scattered Catholic families in and around the village of Austin, pioneers without any form of parish organization.

On November 2, of that year Fr. Michael Prendergast of Winona visited these early settlers and offered them the Mass at the home of Thomas Gibson.  In May of the following year, he repeated his visit and again in November of 1860.

The immense territory under Fr. Prendergast’s care and the primitive mode of travel of these days made impossible a regular visitation of the many settlements entrusted to him.  However, in 1861 Austin and the settlements south as far as the Iowa line were transferred to the jurisdiction of the pastor of Faribault.

Fr. George Keller paid periodical and regular visits to Austin and the work of organization took definite form.  Under this supervision, the building of the first church of the Austin mission was begun in 1863.

Fr. John McDermott, the first resident pastor, arrived in June 1867.  In June 1868, the Most Rev. Thomas Grace, Bishop of St. Paul, visited the parish, dedicated the new church and administered the Sacrament of Confirmation to a group of children and adults.

The beautiful church now used was planned and brought almost to completion under the supervision of Fr. Sullivan.  Bishop Joseph Cotter officiated at the laying of the cornerstone on April 24, 1894.  Death, however, came to Fr. Sullivan June 21, 1896, and the church was completed under the direction of his successor, Fr. Edward Devlin.  It was dedicated on November 26, 1896.

The parish school at Austin was opened by the Sisters of St. Dominic of Sinsinawa, Wisconsin, in 1872 during the pastorate of Fr. Genis.  It continued to function successfully until 1893.  Circumstances including the building of the new church brought about its closing because of the financial burden involved.  However in 1909 during the pastorate of Fr. Devlin, Columbus school was built to meet the needs of the congregation and was staffed by the Sisters of St. Francis of Rochester.  In 1925 St. Augustine High School was added to the parish plant.

In 1933 Msgr. John Peschges was appointed pastor.  That year, owing to the rapid growth of St. Augustine’s congregation, Bishop Francis Kelly established a second parish in Austin to be known as the Queen of Angels church.