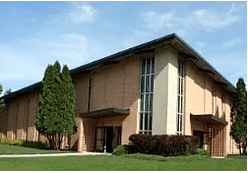 Our Pastors at the Church of St. Edward

It all began when a new parish for the west side of Austin was established by decree of Pope John XXIII on February 3, 1960.  It was incorporated with Leo Sayles and Gordon LaVallie appointed trustees, and a small parish council formed.  The parish was named St. Edward in honor of Msgr. Edward Devlin, who was the only priest in Austin for many years.

Things began to move rapidly after the arrival of Fr. Dan Corcoran on July 13, 1960. Within two days the first rectory was selected by the trustees and the pastor with the approval of the Bishop.  It was at 320 20th St. NW and was occupied on July 15.  There were 332 families listed as Charter Members.

In a temporary chapel in the basement of the Sterling State Bank, the first daily mass was offered.  Furnishings were from the Convent chapel.  The first organ was a small child’s play organ.  The very first sacramental occasion was the baptism of Daniel Hermes on July 17, 1960, in the little Chapel.

Sterling Theater was the site of the first Sunday mass on July 17, 1960.  The alter had been constructed by Gordon LaVallie and there was something new – the priest faced the congregation.  Because of gum on the floor, prayers were said standing instead of kneeling.  These innovations were somewhat startling, considering that this was several years before the changes brought about by Vatican II.  The people of St. Edward’s were pioneers.

Construction of the school building progressed rapidly, and on October 31, 1960, the first mass was held in the Chapel area.  The building was still in a raw, unfinished stage. November brought the move from the theater to our new parish hall for the Thanksgiving Mass.

June 3rd of 1962 found the Parish Council getting the “go ahead” for the new church building.  The groundbreaking ceremony was on June 10.  September was the month of the first of the annual parish picnics.

Construction of the new church building continued at a good pace and on October 20, 1962, the “Merille” flesch, in memory of Merille Bustad the small daughter of Arnold and Arlene Bustad, was lifted to the top of the church.  It was planned, financed, constructed (with the men working 6-8 hours each evening) and erected by her father and the generous, love filled members of the parish family.